On 28 September Spink held an auction a small group of coins from the collection formed by the late Alderman Horace Hird of Bradford. Despite being small, the group includes many breathtakingly beautiful English hammed gold coins.

Therefore, it is no surprise that they fetched high prices but some of the results, notably the Elizabeth pattern groat (lot 51), surprised even me. The pre-sale estimate was £10,000 – £15,000. The winning bid was £400,000 and with a commission of 20%, the buyer will be paying £480,000. Spink announced that this was a new world record for an Elizabethan numismatic item.

The full catalogue can be found here. To see a specific lot in the auction catalogue, click on the lot number.

Spink have produced the following video to accompany the sale.

Born in 1899 in Bradford, Horace was a proud Yorkshireman and an enthusiastic collector of coins for 40 years.

In 1946, he was elected President of the Yorkshire Numismatic Society. He was elected to Bradford City Council in 1944 and served for twenty-seven years, becoming an alderman in 1949 and Lord Mayor in 1951.

Hird’s enthusiastic and discerning nature was driven by his passion for the unusual and the curious vagaries of the die, or as he phrased it “lively souvenirs of bygone days” 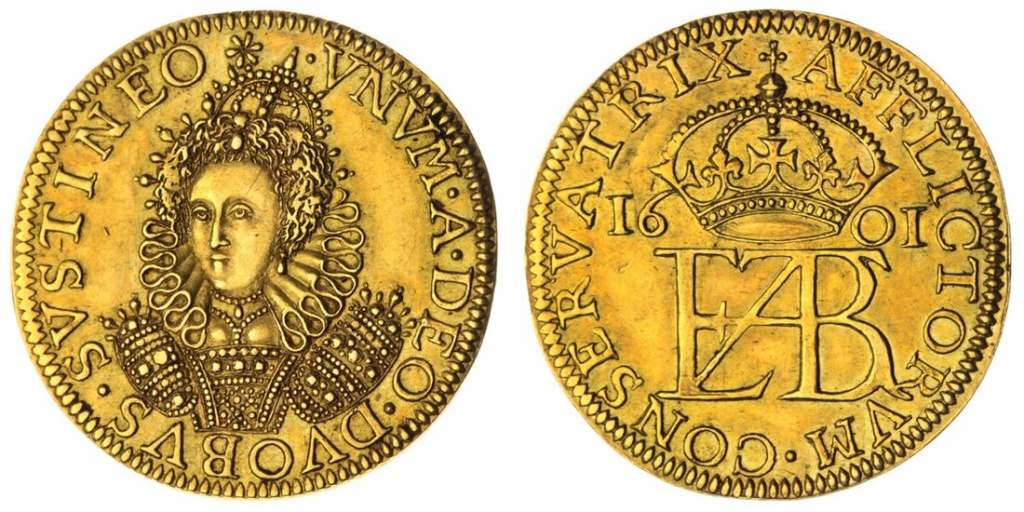 A pattern for a groat, designed by Charles Anthony. This pattern, along with one for a penny, was produced in 1601 for a proposed copper coinage which was never realised during Elizabeth’s reign. Only two examples in gold are known.

Spink say of the coin “a breathtaking canon of Tudor portraiture and most enchanting image of the Elizabethan form, struck on coin alignment with a light ochre tone overlying quite brilliant fields, extremely fine, of the highest rarity with only two recorded in gold, a truly momentous occasion being the first appearance at public auction since October 1956 and a Gold pattern that has evaded even the finest Numismatic cabinets both past and present“ 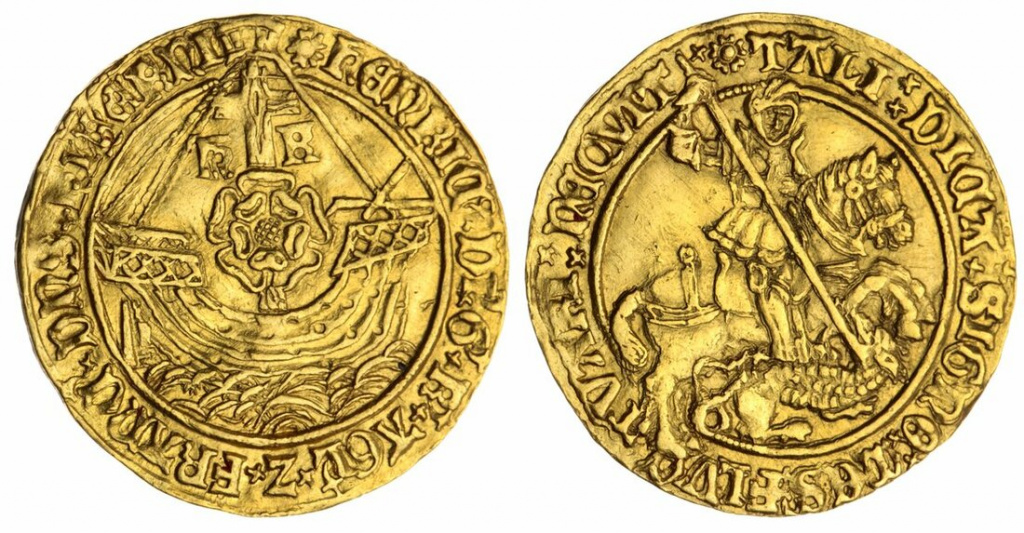 In 1526, in an attempt to stop the drain of gold to continental Europe, the value of English gold was increased. After the Angel had been revalued at 7s 6d the George-Noble was introduced as its replacement with a value of 6s 8d. Relatively few were struck between 1526-29 and only a handful survive

This George Noble has initial mark rose on both sides of coin, ship sailing right with large Tudor rose on mast, h and K above for Henry VIII and Katharine of Aragon. Reverse has St George in armour on rearing horse slaying the dragon. The reverse legend reads TALI : DICA : SIGnO : MES ‘x FLVCTVARI : nEQVIT, “Consecrated by such a sign the mind cannot waver“, a line taken from a 4th century hymn by Prudentius. 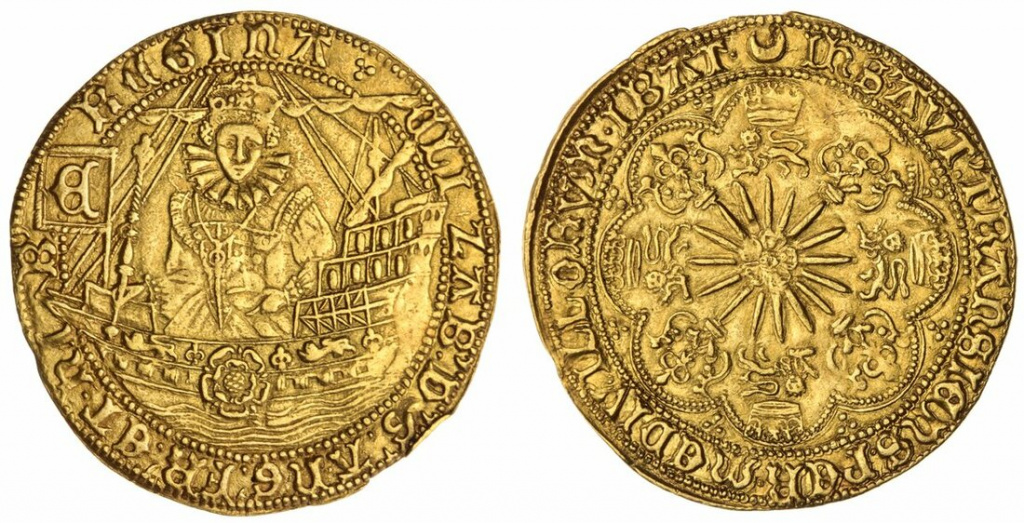 Also known as the “Armada Rose Noble” due to being struck at the time of the Spanish Armada and bearing the iconic Tudor rose. It is the only example of the coin to appear for sale since Hird acquired it in 1950.

The image of Elizabeth and some of the symbolism in the coin is also found in the Armada Portrait of Elizabeth I, painted after the defeat of the Spanish Armada in 1588. The circle of ruff extends from Elizabeth’s face like the Sun’s rays. She is shown as the centre and source of warmth, beauty, and goodness. There are calm seas, positioning Elizabeth as a calm force for good, in contrast with the chaos of Catholic Europe. 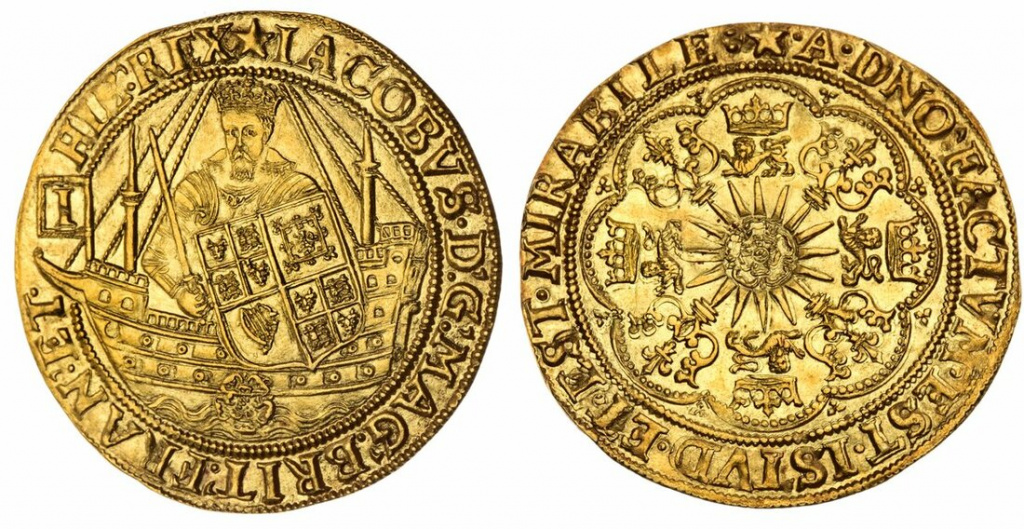 The Ship Noble was also known as the Spur Ryal because the sun and rose on the reverse resemble a spur. It was introduced during James I’s second coinage (1604–1619) when it initially had a value of fifteen shillings. There were relatively few Ship Nobles struck for circulation between 1611 and 1615, reflecting the shortage of bullion during this period. This considered to be the finest known of the coin either in public or private hands

Selection of other lots 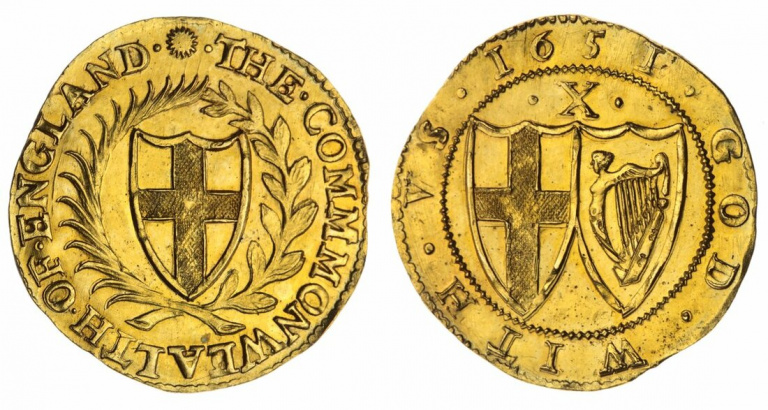 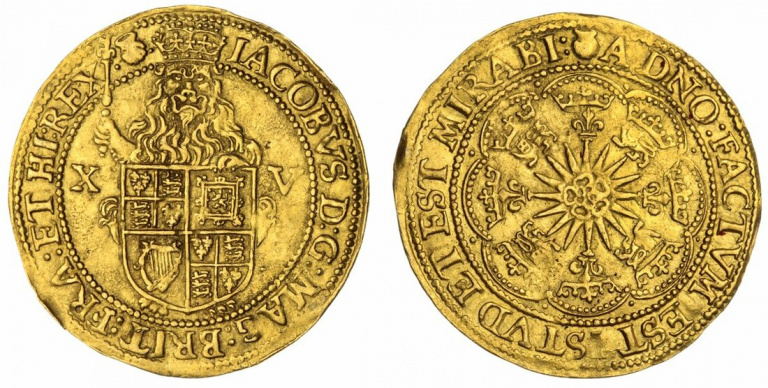 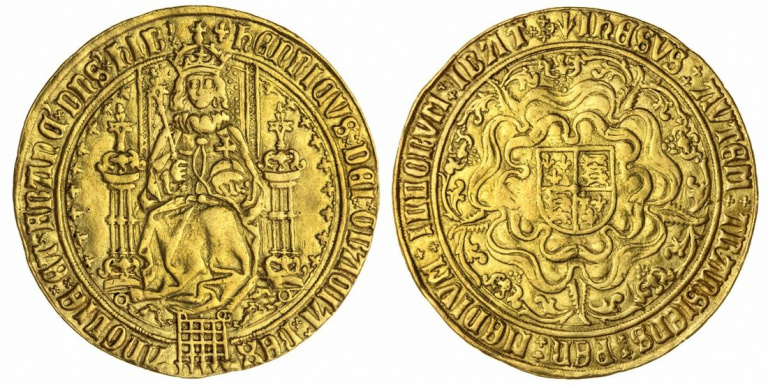 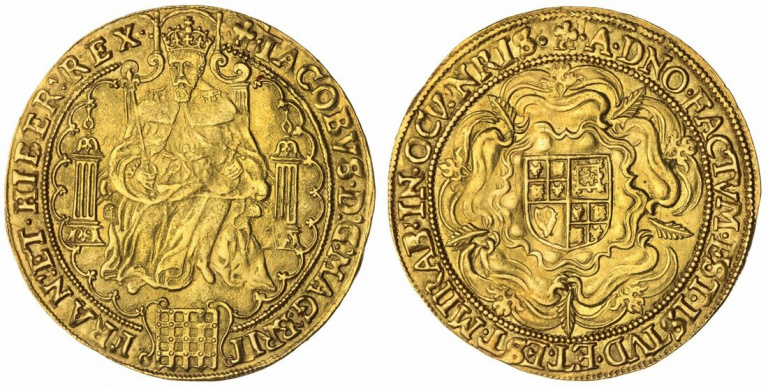