Here is my pick of the finds recorded on the PAS database in the previous week. A total of 144 finds were recorded in the week to 5 March 2021.

Click images to enlarge. All images are shared under CC Licence 2.0 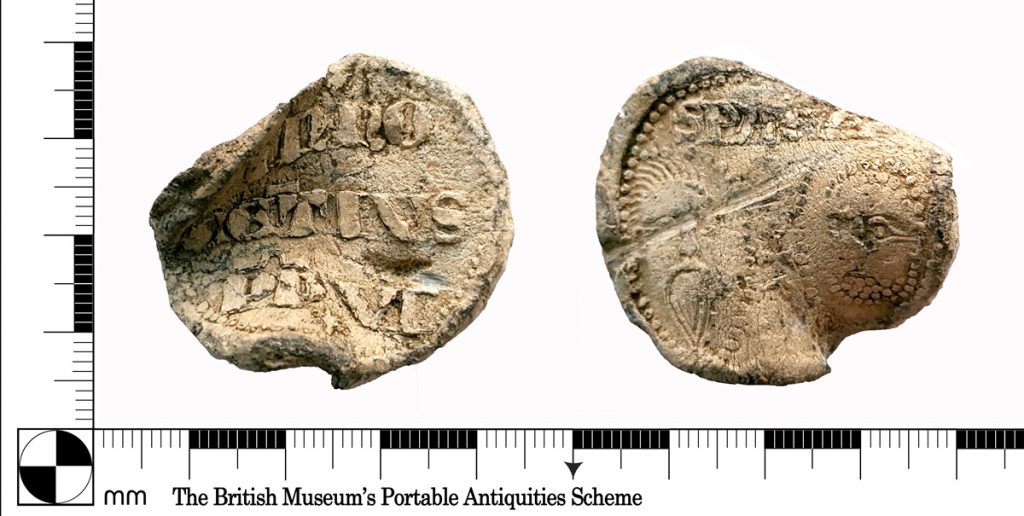 A bulla (Latin for “bubble, blob”) , in this case made from lead alloy, was attached to a document to authenticate and tamper-proof it.

From the 12th century these were attached to official papal documents (known as Papal Bulls, after the name of the seal). The reverse would bear the heads of St Peter and St Paul. The obverse bore the name of the pope, in this case InnO/CETIVS/PP VI, for pope Innocent IV (1352 – 1362).

As a security device, there were a specific number of pellets around the perimeter.

These bulla were on important documents which could give evidence of ongoing rights and so care would be taken to safeguard them. How they ended up in the ground could be accidental loss of personal amulets, burial in graves, or the deliberate destruction of papal documents at the Reformation.

These Armilla were issued to citizen soldiers below the rank of centurion for gallantry. They were usually awarded in pairs and would be worn at military parades and dress uniform occasions.

Figurine of a boar

Copper-alloy boar figurine from the Late Iron Age of Early Roman. There are 48 other boar figurines from the same period on PAS. However, this one is of regional importance because it is only the second one to show evidence of eye decoration and it is from an area where few similar items are found.

It takes the form of a stylised bust of Minerva, goddess of wisdom. This is appropriate given the use of the wax spatula was to smooth down large areas of wax on writing tablets.

Bronze Age copper-alloy spearhead from around 1200 to 1050 BC. Finds of this type of spearhead are concentrated in the lower Thames Valley.