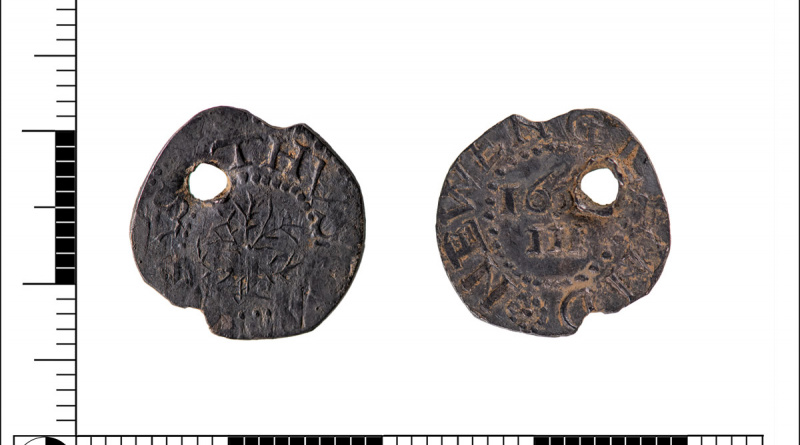 An “Oak Tree” three pence piece minted in Boston, Massachusetts between 1660 – 1667. It has been designated a Find of Note: Regional Importance.

In the years after the establishment of the Massachusetts Bay colony, local trade was conducted by barter, commodity money or wampum (traditional shell bead of Native Americans). By the early 1940’s trade with the Dutch (in New Amsterdam) and Spanish (on the islands of the West Indies) meant that significant amounts of foreign coins were entering the colony. This foreign coinage could be of irregular shape (such as Spanish cobs), which facilitated clipping, and uncertain purity. The colony tried counter stamping coins with their true value but this didn’t prevent coins being subsequently clipped.

Therefore, in on 27 May 1652 the Massachusetts General court passed the Massachusetts Bay Mint Act. This authorised the establishment of a mint where silver could be melted down to produce local coins. Anything containing silver was accepted; silver bars, dishes, candlesticks and jewellery as well as Spanish or other silver coins, whatever their weight or purity. No permission had been sought from the British government for the coinage.

The first issue were “Pine Tree” coins produced in denominations of three pence, six pence and shilling at 22.5% lighter than the sterling equivalent. The use of debased coinage was intended to preserve stocks of silver and keep the coinage local. However, it proved to a great success as it was avidly sought after in a land with very little reliable coinage and was used far beyond the colony. This success would have repercussions.

In about 1660 the change of minting process from hammer striking to a rocker arm press necessitated the need for new dies. Hence, the Willow Tree design, which had replaced the Pine Tree, was itself replaced by the Oak Tree series. In May 7, 1662 legislation was passed to allow the production of a two pence coin.

Although the final number of the date on this coin has been removed by the piercing, it will have been “2”. All the three pence, six pence and shilling pieces produced at the Boston mint bare the date 1652.

One suggestion is that the minting of coinage was a Royal prerogative and that this date was used as, in that year, England did not have a king (Charles I having been beheaded three years earlier).

However, the Oak Tree two pence has the date 1662 and so a more likely reason is that the coins bare the date of the legislation which first allowed them to be minted.

Closure of the mint

The mint’s success was part of its own demise as the debased coinage was considered to undermine the standing of sterling and with the restoration of the monarchy in 1660, political pressure began to mount. In May 1665, the king’s commissioners were in Boston and requested that the minting law be repealed. The colony resisted the changes, arguing that the mint was need for them to prosper without which the king’s custom charges would decrease.

The mint eventually closed in the early 1680s. On 23 October, 1684, Charles II abolished Massachusetts Bay’s charter and placed the colony under royal control. The Massachusetts Bay mint had been the first, the most successful, and the longest running of all the colonial minting enterprises.